Somewhere between Rasagullas and lip-smacking fish preparations, many rich Bengali delicacies go unnoticed. And one such delicacy is the Calcutta or Kolkata biryani. One can also blame the greater popularity of its southern counterpart -Hyderabadi Biryani, which might have for long prevented the Kolkata style biryani to flourish in all its glory. But Kolkata biryani is slowly working its way out of the canals of the City of Joy and gaining the due recognition it has long deserved. Made with aromatic rice, tender meat and a handful of masalas, the Kolkata biryani has long been delighting the palates of the City of Joy since over a century now.

Calcutta or Kolkata biryani evolved from the Lucknow style. The hallmark of Kolkata style biryani is the use of eggs and potatoes. The rice and meat are cooked separately in this style of biryani. Similar to Lucknowi biryani, Kolkata biryani is light and pleasant for the stomach. It is also regarded as a treat for vegetarians since it has potatoes.

When the King of Awadh, Nawab Wajid Ali Shah was dethroned by the British in the year 1856, he was exiled to Kolkata from his capital Lucknow. Being fond of his tastes and indulgences, and to ensure he didn't have to compromise on either, he brought his entire entourage of chefs along with him. But the indulgences of the Nawab were in a fix due to scarcity of money. It was here that his cooks decided to innovate, and tried various combinations and experiments to enhance the taste of chicken or mutton biryani. On one such occasion potatoes were added while cooking the biryani. It appealed to the taste buds of Nawab Wajid Ali Shah. He was so pleased that he ordered that henceforth whenever biryani is cooked, potatoes must be added! Also, the poorer households of Kolkata could not afford meat and carried on the tradition of using potatoes instead, which went on to become a specialty of the Calcutta biryani. And the rest is history!

How we make the best Calcutta Briyani in Bengaluru

Potful’s Calcutta or Kolkata mutton biryani is exceptionally light, low on essence and colour. It is much lighter on spices, using just the right amount of spice to enhance the taste. We marinate the meat in a dahi-based marinade and flavour it using nutmeg, cinnamon, mace, cloves and cardamom. This combination of spices gives it a distinct flavour as compared to other styles of biryani. The rice is flavoured with ketaki water or rose water along with saffron to give it flavour and light yellowish colour. Rice is steamed with cooked mutton, spices and the much loved browned potatoes in a huge biryani pot. This clay pot biryani is then delivered to your doorstep without breaking the seal. You get to enjoy the delicious aroma of the freshly cooked Kolkata pot biryani as you open and savour it. It is served with accompaniments like boiled egg, or gravy dishes like Chicken and Mutton Korma.

Drawing comparison to other biryanis, the Lucknowi Dum Biryani relies more on the flavours of the meat than spices to pull it through. As you go down south to the courts of the Nizams of Hyderabad, the Biryani tends to include more masalas. The Kolkata biryani is a sub variant of the Lucknowi-style of biryani. Since this was derived from the Lucknowi dum biryani, it is similar in a lot of aspects, the main difference being the addition of potatoes. A person who does not enjoy rice that much and would love to add eggs and potatoes to it and also for the vegetarians, Kolkata biryani is the best. Most vegetarians find that they do not have any options when it comes to Biryani. For our vegetarian food lovers, Kolkata biryani is the way to go.

Biryani is now a common dish in the menu at most food outlets. However, places which inculcate the traditional olden cooking methods and bring you the authentic biryani flavour are rare to find. Potful brings to your home the best biryanis from all over India. We retain the original cooking styles invented as early as the 17th Century.

Potful Calcutta mutton biryani and Calcutta chicken biryani can be ordered online in the original clay pot in which the biryani is cooked, and it is untouched and unopened until it reaches you.

Now get the flavours of Calcutta at your doorstep in Bangalore. 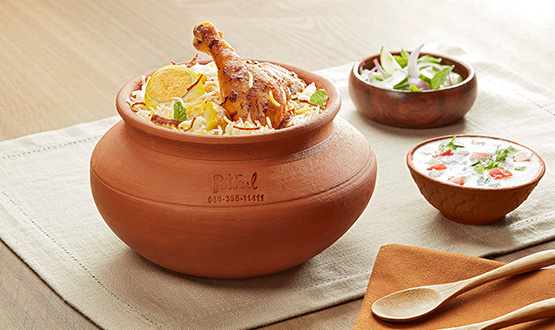 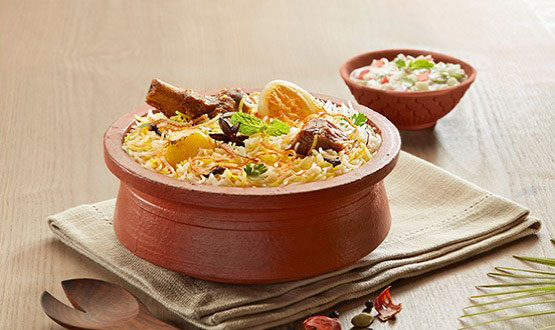 Now get the flavours of Calcutta at your doorstep in Bangalore. We provide home delivery of freshly cooked, mouth-watering traditional biryanis from across India. Kolkata dum biryanis and other pot biryani variations can now be ordered on our site and you can download Android and iOS application.

Feel like pot biryani kind of day? Don’t worry! Keep calm. Go off your kitchen duties. Order your choice of Potful clay pot biryani. And, enjoy an additional discount of 20% on all orders!